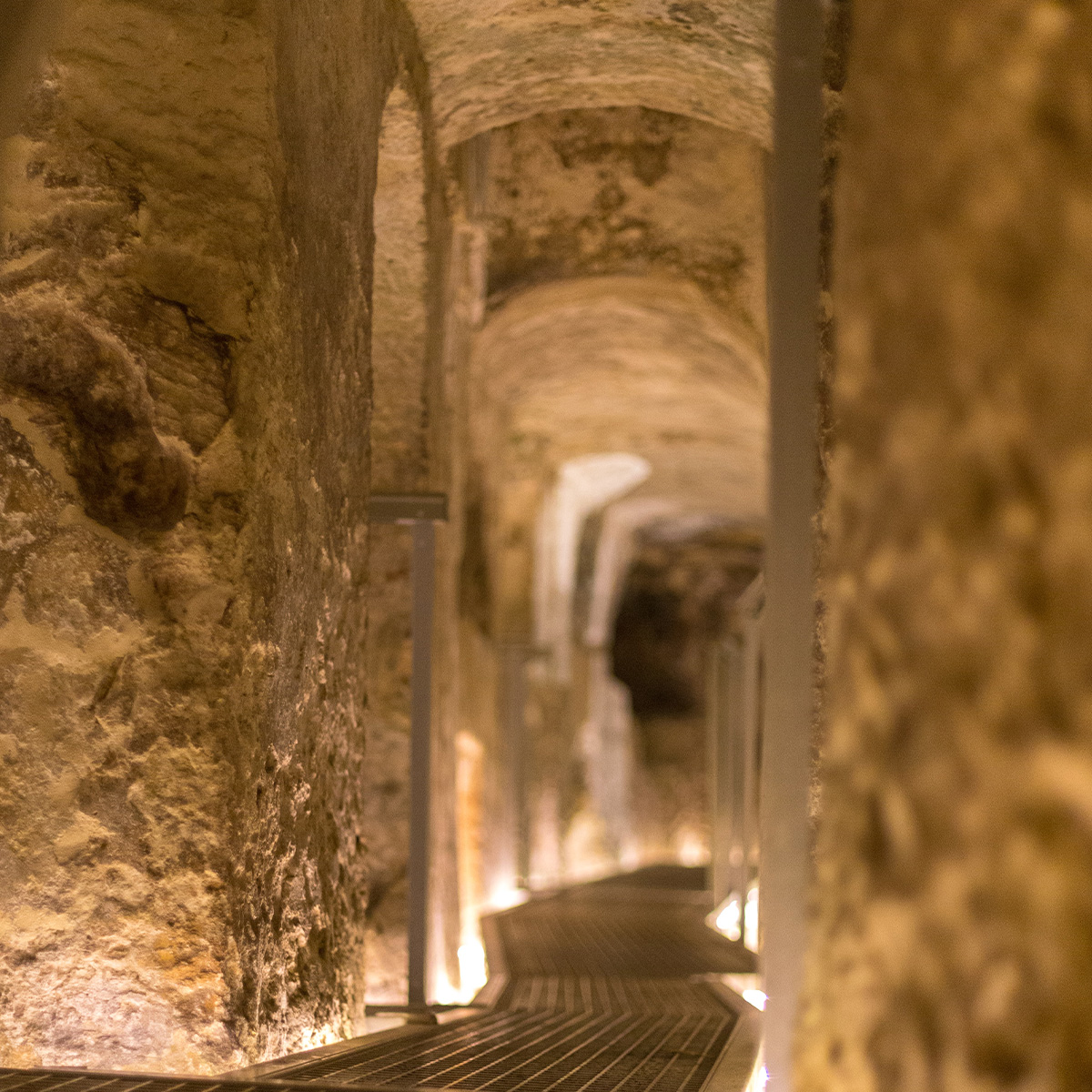 For years, the mystery and haunting history of the catacombs located beneath the cobbled streets of Paris have piqued the interest of millions of intrepid visitors. But you don’t have to travel to France to get up close and personal with the same depth of history — and mystery — when you can find it right here in Indianapolis at the Indianapolis City Market Catacombs. Located just beneath City Market at the Whistler Plaza site are the Catacombs, a vast collection of Romanesque brick arches with a historic — and decidedly haunting — vibe mark the remains of Tomlinson Hall, a landmark Indianapolis building that burned to the ground in 1958.

These atmospheric passageways, tunnels, and arches of what became the present-day Catacombs were constructed in 1886 beneath the Hall, which stood as the bustling hub of City Market. In its heyday, Tomlinson Hall could hold vast numbers of people and the spaces below were used by City Market workers to ferry goods to be sold in the market from place to place. For goods that required refrigeration, these subterranean spaces were a godsend, allowing perishables to be preserved for longer periods of time. But over time, interest in — and use of — the Hall declined, leading to the building’s eventual demise.

However, in between its beginning and its recreation as a historic landmark, the Hall and its associated underground architecture is possessed on an interesting — and colorful — history.

The Early History of Tomlinson Hall and the City Market Catacombs

Tomlinson Hall was constructed from money bequeathed by its namesake, a local druggist named Stephen D. Tomlinson. Located on the corner of both Market and Delaware on the site of a farmer’s market that had been extant since the 1830s, its proximity to the City Market was critical to Tomlinson Hall’s popularity as a public meeting place and events venue.

A local architect, Diedrich Bohlen, won the right to construct the Hall according to his original design. Work began on the Hall in 1883 and continued for over two years with a total cost of $125,000 ($3,631,262.25 in today’s dollars). The first floor of the structure helped contain the overflow of vendors from nearby City Market as well as providing additional office spaces. The second floor, on the other hand, comprised an auditorium large enough to accommodate 4,200 people — plus an additional 650 people on its ample stage.

The archways, beautiful and haunting, were also utilitarian. There are hooks mounted in the centers that were placed strategically to allow meats to dry so that air circulated around all surfaces for faster, more hygienic preservation. A brick lined pit nearby suggests that ice may have been placed there to provide an in-ground refrigerator for particularly delicate items.

In fact, the Hall’s subterranean areas were so insulating that in 1911 during a particularly frigid winter, the mayor opened the area to act as an impromptu shelter for the city’s homeless population. When more than 350 men turned up to take advantage of the accommodations, the event became known as the “Mayor’s Pajama Party.”

As early as the 1930s, Tomlinson Hall was falling into disrepair. By the 1950s, city politicians and leaders attempted to discuss what should be done with the structure, with suggestions from demolition to converting it to a parking garage. By 1955, the structure was in such a bad state of repair that the National Board of Fire Underwriters dubbed Tomlinson Hall “the City’s worst fire hazard” in an eerily predictive statement.

On January 10, 1958, the City’s worst nightmare came true, and Tomlinson Hall burst into flames. Local lore has it that a pigeon carried a lit cigarette to the roof, igniting the blaze, but the truth will never be truly known. At any rate, firefighters were unable to save the building and the city decided to raze the upper parts of the building, leaving the basement intact.

In later years, the Catacombs, as the basement of the Hall is now known, have had many functions. In the 1960s, the local police used the area as a shooting range. By the 1970s, the revitalization of City Market brought renewed interest in the underground spaces, drawing public curiosity and spurring renewed interest. In the 1980s and 1990s, the haunting ambience of the cavernous underground space made the Catacombs a popular gathering spot for Halloween parties. Currently, the 20,000 square foot Catacombs are a place to soak up some bonafide Indianapolis history on one of the many guided tours available.

Schuetz Insurance was already in business for fifteen years when the Tomlinson Hall fire occurred, so the history of the Catacombs is interwoven with our own. And even though most of you won’t have to worry about a cigarette-toting pigeon burning down your home or business, at Schuetz, we are aware that it’s smart to be protected against even the most unlikely of events. That’s why our long history of helping Indianapolis clients stay protected from fire, theft, accidents, and more with reliable, cost-effective insurance products can help you be more confident in your future. Contact us today to learn more!

What You Need to Know About Building a Carriage House

In the past, a carriage house was a historic building that typically housed horses and a carriage on the...